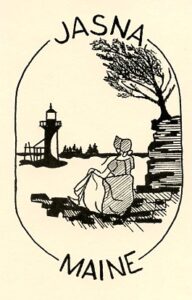 JASNA ME began meeting in 1979. In 1980, we became an official region under the Jane Austen Society of North America (JASNA). Doris Lindquist was the first Regional Coordinator (RC). We currently have around 80 members and many more “friends” on our mailing list. Meetings are held three times a year, in April, September, and December. The December meeting includes cake and a birthday toast to Jane Austen. We also toast the Queen for good measure.

Our meetings vary. Topics range from teas (with tastings), to English country dancing, to Jane Austen as a mall rat (Clueless) and to more serious literary discussions of her six novels and/or the Regency era. There is always some type of food involved. We have just initiated a book group which will focus on the old and the modern in literature, depending on the whims of the group.

We are always in need of more member participation with tasks large and small, from joining the regional board to writing book reviews for our website to bringing salads to meetings. Our goal is to make our region grow, offer interesting and varied discussions, and ensure that our region can thrive for future generations.

About JASNA
The Jane Austen Society of North America was established in 1979 by Joan Austen-Leigh, Henry G Burke and J David Grey. The Society is a non-profit organization staffed by volunteers and dedicated to the enjoyment and appreciation of Jane Austen and her writing. The mission is to foster among the widest numbers of readers the study, appreciation and understanding of Jane Austen’s works, her life, and her genius. Joining JASNA allows you to join a region (hopefully Maine). There is an annual due to join JASNA but no further dues to join a region. JASNA members receive a subscription to JASNA News and the scholarly journal Persuasions. There is also an Annual General Meeting (AGM) which is a three-day conference with an Austen theme hosted in either the USA or Canada.

To contact committee members please email us at janeite2@gmail.com