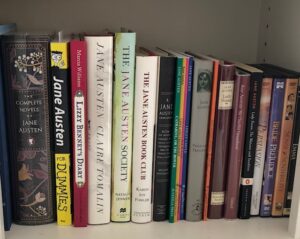 Sheila Kaye-Smith, one of the more prolific novelists of the 20th century, is now largely unread. She may be known by contemporary readers as one of the group of novelists sneeringly described as of “the loam-and-love-child school” and soundly mocked in Stella Gibbons’ Cold Comfort Farm. G. B. Stern’s fictional world — notably defined by her five-volume saga of a Jewish family in London — also remains obscure today. Although it is difficult to imagine these two writers as sharing much in common with Austen, they came together during World War II to produce this delightful series of essays. Stern claimed to first come across Austen’s novels while trying to cope with the effects of the the First World War, and that perspective carries over into this 1944 volume. The book asserts that “you can forget a war when you are reading Jane Austen for the first time, the second time, the hundredth time; you can forget strain and sorrow and perplexity, injustice and fear” (20). Sheila Kaye-Smith writes that she finds “great moral support during air-raids” by reading comic dialogues in Austen’s work.

For both Kaye-Smith and Stern, Austen’s fiction allows readers to find “normality in a normal” world. The book juxtaposes essays by each author, with Stern’s work paying most attention to Austen’s style and characterization and Kaye-Smith’s to the ways in which Austen reflects habits and modes of life in the late 18th and early 19th century. Both have strong opinions about the relative merits of the various novels. Emma is Stern’s favorite work. She claims the novel is a gold-mine of comic characters. She devotes an entire essay to characters she describes as “chumps”—Mr. Woodhouse, Harriet Smith, Mrs. Dashwood, Lady Bertram, Charlotte Palmer, and Mrs. Allen—among the most delightful parts of Austen’s world in her view. Not surprisingly, Stern loves Mary Crawford. Kaye-Smith is less impressed. Her favorite Austen novel is Sense and Sensibility, and she puts Pride and Prejudice at the bottom of her rankings. Kaye-Smith praises the depth of feeling in Sense and Sensibility and links its emotional import to that found in Persuasion. Each writer describes the characters she sees as a kind of failure on Austen’s part. For Stern, Lady Catherine de Bourgh’s rudeness exceeds plausibility, Colonel Brandon ought to be called “Colonel Wet-Blanket,” and Eleanor Tilney falls short as a friend to Catherine Morland. Sheila Kaye-Smith is more reticent about pronouncing on Austen’s failures, but she finds Lady Russell insufficiently developed, largely because Austen does not give her much dialogue. The collection includes an intriguing pair of essays about very minor characters that each author would like to see more fully developed. Stern, for example, wants to hear more from Charles Maddox in Mansfield Park and wonders what kind of comments Colonel Forster might make about Wickham and Lydia. Her speculative projections go beyond these in a later essay when she claims that Elizabeth Bennet and Henry Crawford would make a very interesting match, an updated Beatrice and Benedick, sparkling in their wit combat. Kaye-Smith would like to eavesdrop on John Knightley’s children to see what they might have to say about their grandfather’s fussiness and eating habits.

The book includes a very detailed Austen quiz (I would fail it), and it juxtaposes the openings and endings of each novel in order to show how tidily (often too tidily) Austen closes the books, while the openings remain sparkling and full of possibilities. After nearly 80 years, Speaking of Jane Austen seems a period piece itself. Yet it remains a charming read and confirms how easy it is to speak about Jane Austen with others who love her work.

Terri Nickel lives in Bath, Maine. She started reading Jane Austen novels in college long ago and joined JASNA-Maine around the year 2000. When she is not reading Austen, she spends her time gardening, cooking, watching Britbox, and reading novels written by British women between 1920 and 1970.